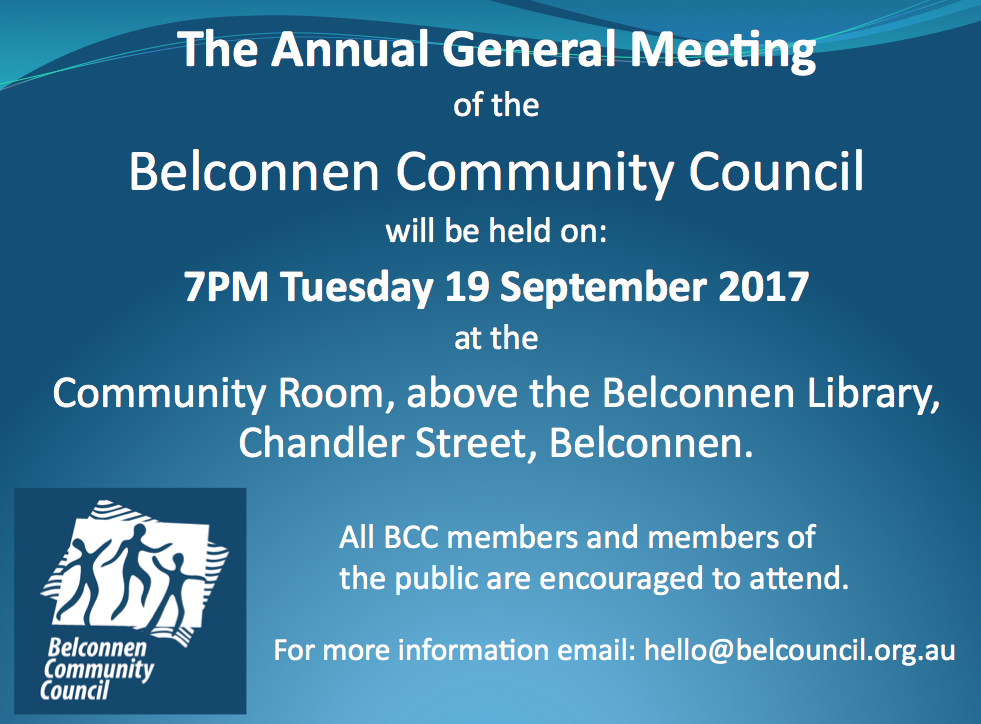 The Annual General Meeting of the Belconnen Community Council will be held on:

The AGM will be held with all Committee positions declared vacant with an election held if more nominations are received, than positions to be filled.

Following the AGM, the monthly public meeting will be held. Full agendas will be published shortly.

Nominations for all BCC Committee positions must be received by the Secretary no later than 7 days prior to the AGM. Nomination forms can be found here:

Nomination forms can be found here:

The BCC encourage all members to consider nominating for the Committee.

All BCC members and members of the public are welcome to attend.

Timeline PhotosSTRATHNAIRN ARTS | c.1960 This picture is taken from behind what we now know as our "Studio 1". This building used to be the Cooks cottage at the back of the Homestead, when the property was a working farm.
​
​Would you like us to post more about the history of Strathnairn Arts?
​📷 via Strathnairn a Place for People. www.strathnairn.com.au/about-us/about ... See MoreSee Less

The date this photo was taken is unknown but it shows an aerial view of Lake Ginninderra and the suburb of Lawson.

What an incredible shot of Belconnen!

At this angle, it almost looks like there's a funny kind of spaceship about to take off from the town centre.

Have you been taking any evening walks around the city lately?

In line with Step 3.1 of Canberra’s Recovery Plan, the ACT Government plans to make minor and cautious changes to the current COVID-19 restrictions in the ACT for some sectors that have been closed since March.

Subject to a successful public health risk assessment (check point) later today, the following changes will apply from 9am on Monday 10 August 2020.

𝗜𝗻 𝗮𝗱𝗱𝗶𝘁𝗶𝗼𝗻, 𝘁𝗵𝗲 𝗳𝗼𝗹𝗹𝗼𝘄𝗶𝗻𝗴 𝘄𝗶𝗹𝗹 𝗮𝗽𝗽𝗹𝘆:
☑️ Community sport activities can have a maximum of 100 spectators for each indoor and each outdoor space, where the one person per 4 square metre rule can be observed. This excludes staff and participants.
☑️ Bar, pubs and clubs are able to continue to serve alcohol to seated patrons, with no limit on the size of group bookings.
☑️ When gyms, health clubs and fitness facilities are unstaffed, a maximum of 25 patrons are permitted to be in the venue at any one time.
❗️ All venues, facilities and businesses must clearly display occupancy allowance at entrance to each venue or space.
❗️ Venues, facilities and businesses which can now reopen must develop and follow a COVID Safety Plan.

𝗪𝗵𝗮𝘁 𝘀𝘁𝗮𝘆𝘀 𝘁𝗵𝗲 𝘀𝗮𝗺𝗲:
All requirements under Step 2.2 remain in place, in particular:
☑️No limit on household visits.
☑️ The limit on the number of people allowed at outdoor gatherings remains at 100 people.
☑️The current arrangements of one person per 4 square metres of usable space rule applies, up to 100 people in each indoor and each outdoor space. This excludes any staff on premises.

𝗪𝗲 𝗮𝗹𝗹 𝗻𝗲𝗲𝗱 𝘁𝗼 𝗰𝗼𝗻𝘁𝗶𝗻𝘂𝗲 𝘁𝗼 𝗯𝗲 𝗿𝗲𝘀𝗽𝗼𝗻𝘀𝗶𝗯𝗹𝗲
The requirements under the Public Health Directions are not just the responsibility of businesses - they extend to all Canberrans.

We must all be sensible when having people in our homes and put in place our own control measures. This includes knowing who is there and at what times, and downloading the COVIDSafe app.

Importantly, we must maintain our best lines of defence against the disease by physically distancing, practising good hand and respiratory hygiene, staying home if unwell and getting tested if you have symptoms.

These principles have not changed and are the best way to keep our community safe and to prevent the spread of COVID-19.

We all have a part to play. Canberra is stronger when we work together—don’t set us back. ... See MoreSee Less